Buffalo Bill may lose their first two rookies at the beginning of the season.

Second-round pick linebacker Reggie Ragland hurt his knee without any contact when he chased running back Reggie Bush in Friday’s training.

Bill is still unable to determine the severity of the injury, but coach Rex Ryan said he was very worried. Up to now, the team believes this injury did not hurt Ragland’s ligament. 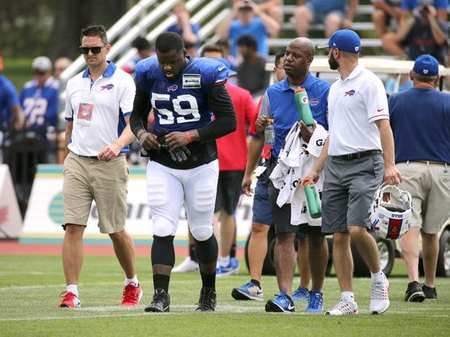 Ryan’s fears stemmed from his sense of foreboding. Of course, the new of Ragland’s injury will update sooner.

Ryan also said the wounded Ragland “looks very strange,” because he has not been crashed, he added, “But sometimes these injuries may be more serious.”

After the MRI didn’t obtain any result, Ragland will visit more doctors and get more advice on Monday.

Bill has determined that the first-round pick Shaq Lawson will miss the start of the new season because he underwent shoulder surgery in the offseason.